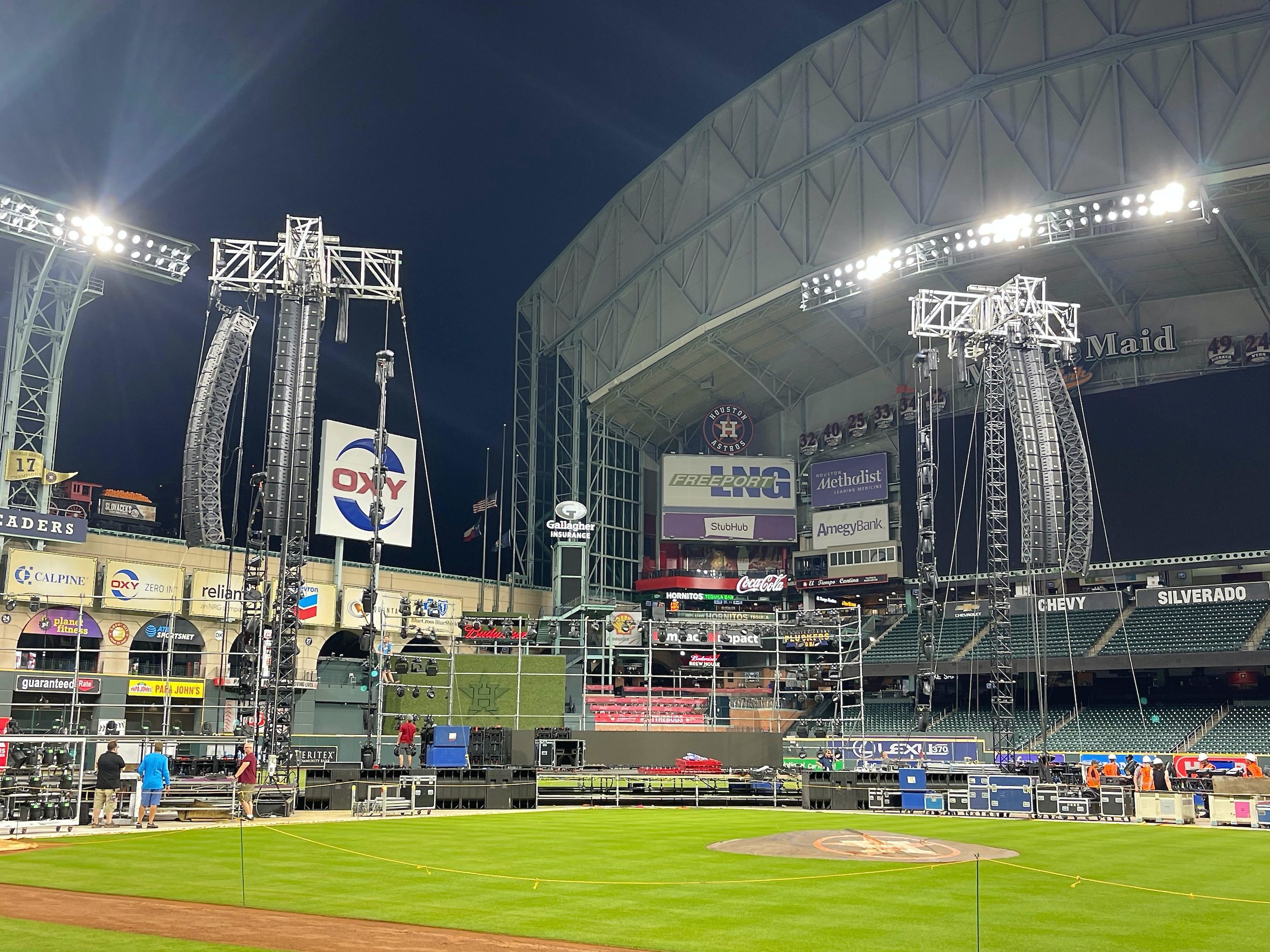 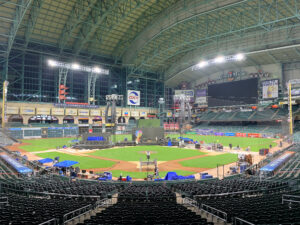 Houston, TX — With its roots going all the way back to 1847, the LCMS (The Lutheran Church – Missouri Synod) is a traditional, confessional Lutheran denomination with 1.8 million members, making it the second-largest Lutheran body in the United States.

Their triennial Youth Gathering is a five-day meeting which has been staged since 1980, providing an opportunity for thousands of young adults to come together as a community of God’s people to learn about the Christian faith and their Lutheran identity. The 2022 event was held in Houston (Texas) across a number of venues, the largest being Minute Maid Park, a baseball stadium which is normally home to the Houston Astros. 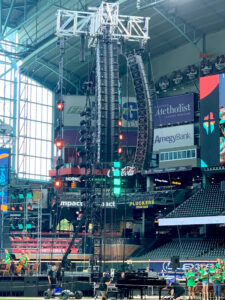 A long-time user of Outline loudspeaker systems and no strangers to this kind of application, SES deployed part of their GTO inventory to cover the stadium. Four 15-deep arrays were flown from two ground-support towers close to first and third bases, configured L/R/LL/RR, with low frequency reinforcement provided by 18 LAB 21 Outline infra-subwoofers.

Because no participants were permitted on the field itself, the sound system needed to reach people up to around 300’ (91m) away, in the stands. Jason Farah from Special Event Services comments, “The configuration of the PA allowed me to deploy the system with a sufficient number of tight angles at the top of the array to provide excellent coupling and thus the horsepower necessary to reach that long throw.” 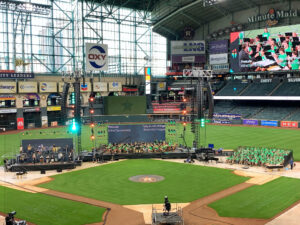 “The Smaart traces taken initially at the various seating levels (Levels 100 through 400) were remarkably similar – they basically overlaid each other, demonstrating the inherent performance of the GTO system. While I did have the ability to EQ the individual zones within the array (to even out the possible response curves in the various levels), that was largely unnecessary: the only zone EQ needed was a small HF shelf I put on the bottom three cabinets to reduce the relative ‘sizzle’ in that nearest zone. That single filter was all that was needed to make all the zones’ response curves lay atop each other. Once that was done, I could apply the overall array tuning, knowing that the experience was the same throughout the entire listening space.”

The system relied on a pair of Outline Newton processors, one for each tower: “The Newtons performed flawlessly and the superior WFIR filtering technology made tuning the system effortless. The result was a full, smooth, totally natural sound at every seat in the stadium. My audio systems assistant, Andrew Steelman, had the opportunity to walk up to the top of the 400-section to the rearmost seats. He reported that it sounded every bit as good there as anywhere in the stadium.”

Barry Dixon mixed FOH at the stadium and he clearly enjoyed his work on this occasion: “From a front of house mix perspective, I was completely impressed on many levels by the Outline GTO system.” 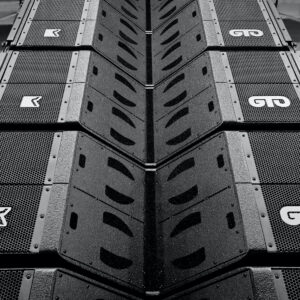 “This was an extremely difficult application for any PA. Not only did it have to hang from towers as there was no roof or structure, it was blowing into open mics on three stages and it was hundreds of feet from the audience. It was mission critical to tie the audience to the event by effectively reaching them from an audio perspective with the PA system.”

“The overall cohesiveness of the system across the spectrum was very impressive even at the extreme distance to the crowd – it gave me the impression that there was a single full spectrum point source at the right and left towers. There was no sense of ever struggling with the cracks between awkward crossover points or between the different transducers in the individual loudspeakers. The system also presented vocals and speech to the audience very effectively, with emphasis on the word ‘presented’ as one almost got the sense of having the mix served to them. At 300 feet away, it did not sound like one had to reach out and have to work to perceive the spoken word or vocal.” 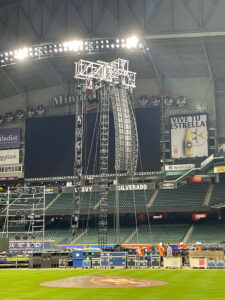 “The subs were astoundingly tight and musical. What do I mean by tight? One example is, when I added a touch of 45Hz to the kick, what I got was a sense of movement in the sternum. In other cases with ‘looser’ subs, adding this frequency just muddies the very low end. So what do I mean by musical? I suppose I’ll summarize that by using more subjective terms like it was ‘warm’ and ‘enveloping’ as opposed to ‘incongruent’ and ‘muddy’.”

Barry continues, “Subtractive EQ was my predominant approach to the mix because it could be. I know the textbook logic around channel EQ is to concentrate on what one can take away more than on what one can add. That makes sense with a system that cooperates and this one did. I did add some high end to the vocals and sometimes speech but largely the channel EQ was about what I took away. In terms of headroom, there’s plenty of it, the system didn’t fall apart when it was pushed. The system sounds the same, just louder, when more is demanded from it as it does at a ‘nominal’ level. Its character didn’t change across a dynamic spread.”

“My experience with this system overall was that each instrument shined. We had a steel player and with very little effort, he stood out as a feature very nicely. We had guest cello and violins, they too were featured with very little channel work. The bass with light compression and some subtractive EQ was warm and settled into the mix nicely. The kick, with very little EQ had high end attack that helped its position in the mix. Speech intelligibility was great.”

“I’m looking forward to my next opportunity to mix with this PA and work with Jason. I’d also like to mention that the system as designed, flown and tuned by Jason Farah, with the very capable assistance of Andrew Steelman, was delivered in a very hot, stressful and time-crunched setting – the importance of a relationship that allows for cooperation and collaboration between the system and mix engineers can’t be overstated so, Jason, thanks for letting me cook in your kitchen!”

Jason Farah concludes, “While we deploy GTO often, it never ceases to amaze me with the results we get. Its power, fidelity, and unsurpassed stereo imaging makes it my system of choice. When it comes to large-format events, nothing compares.” 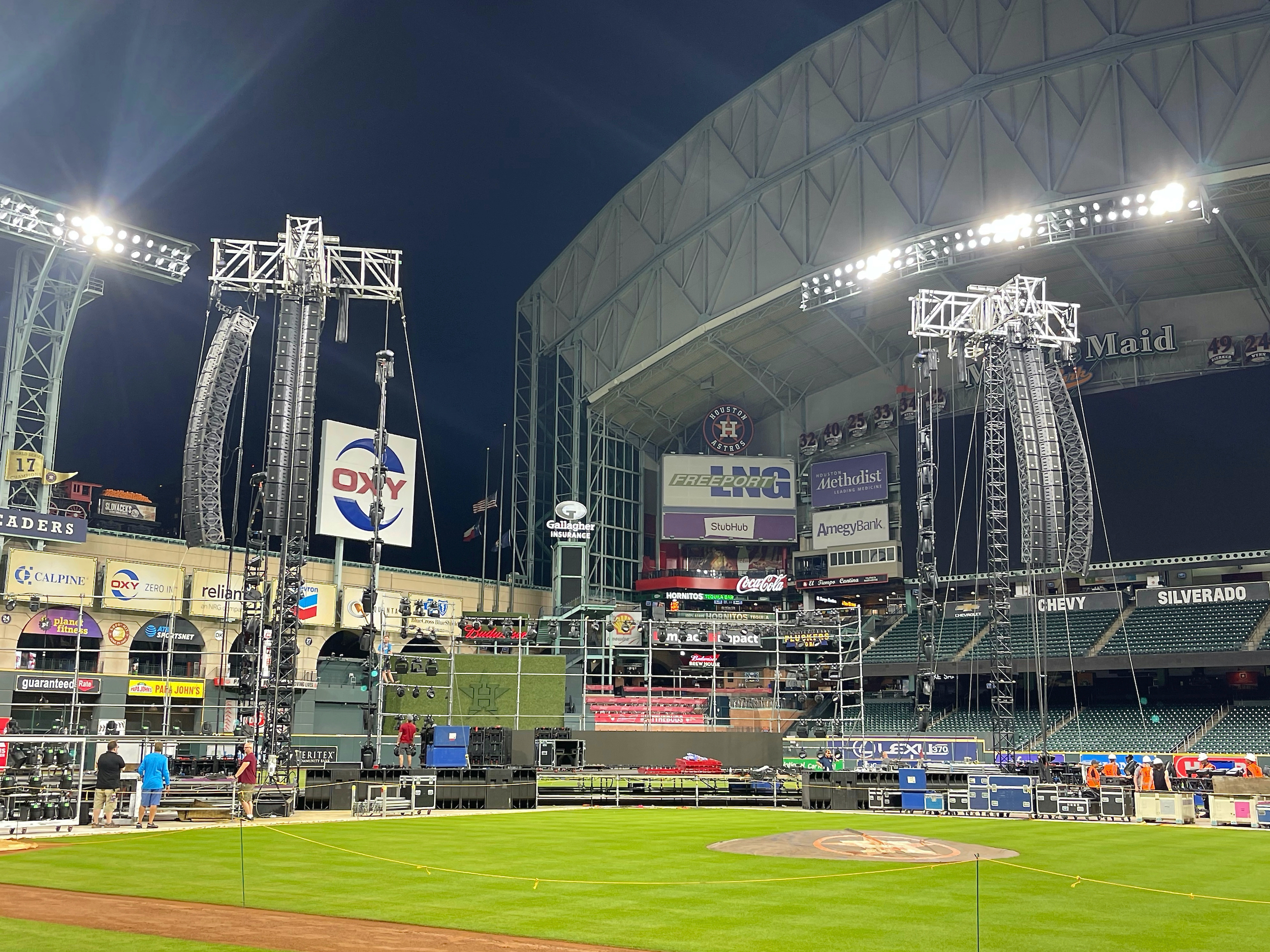 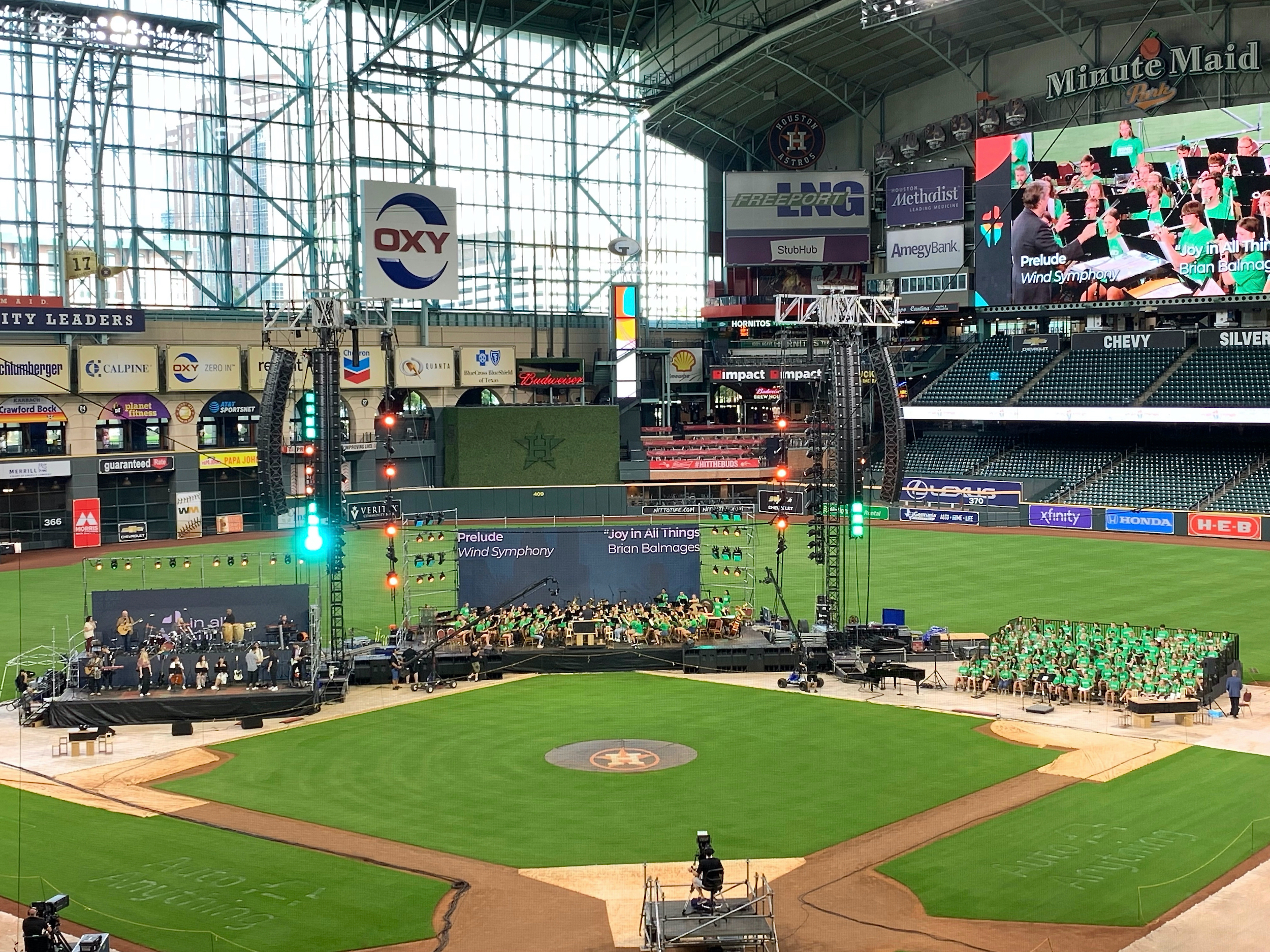 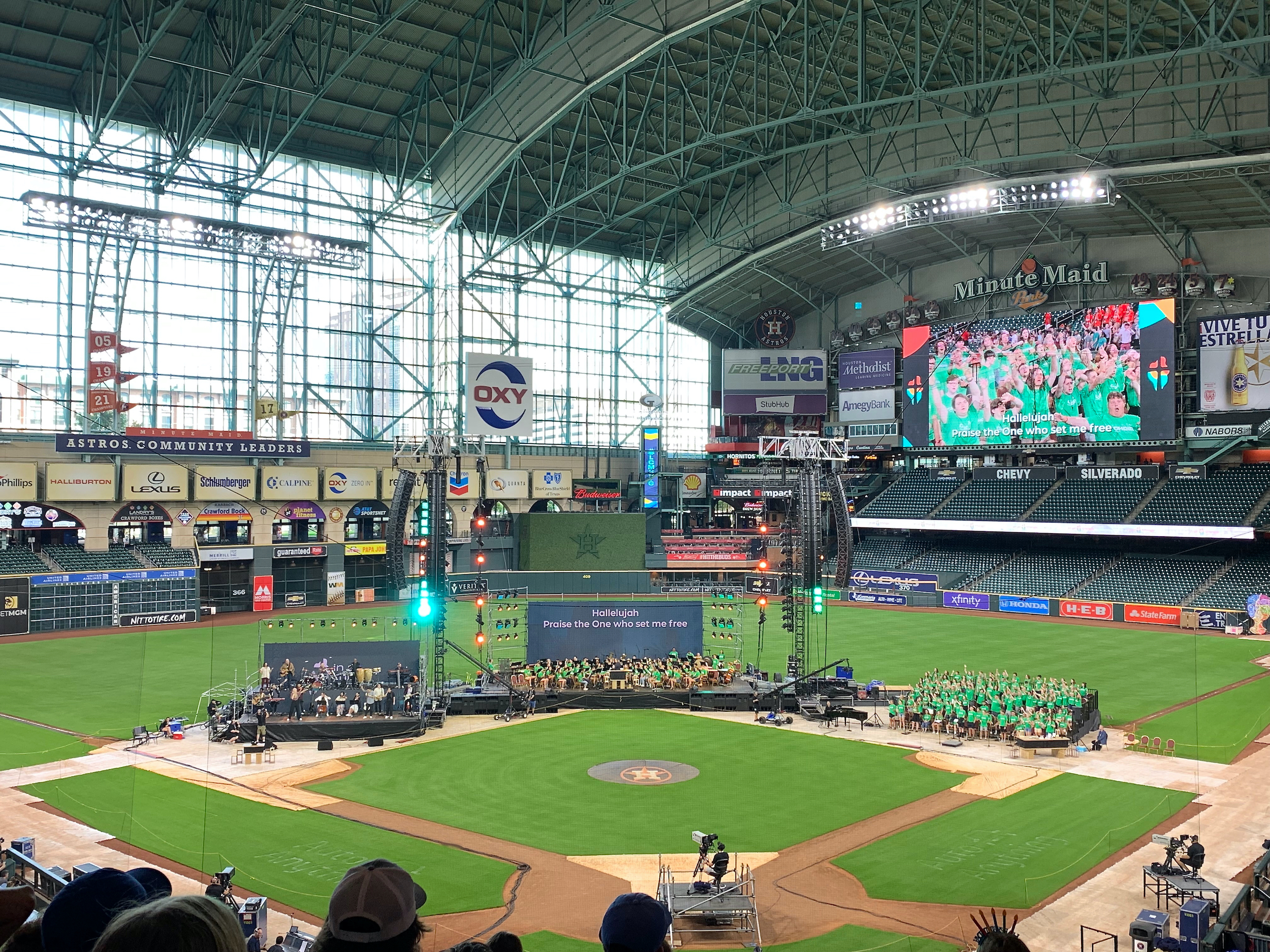 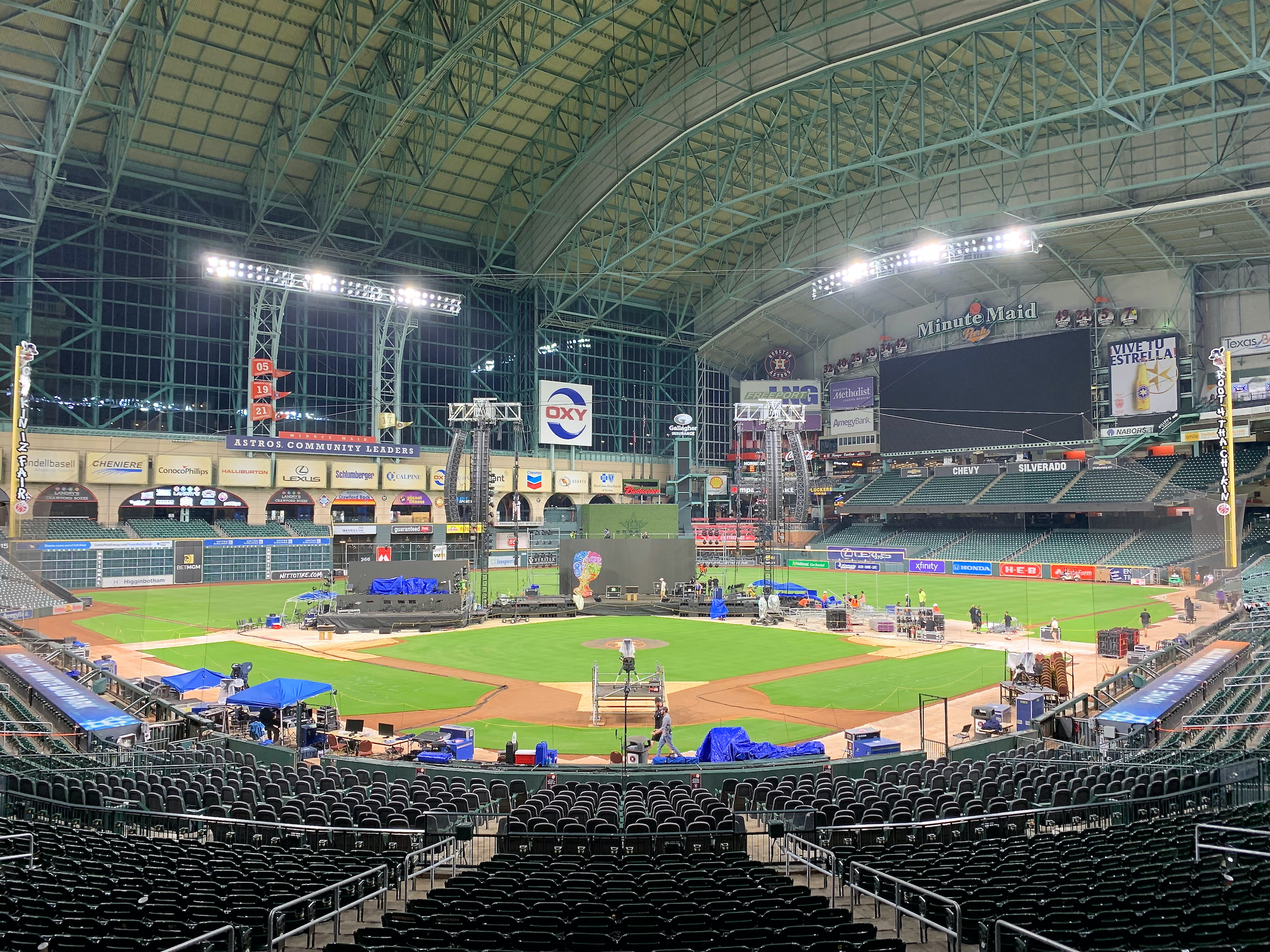 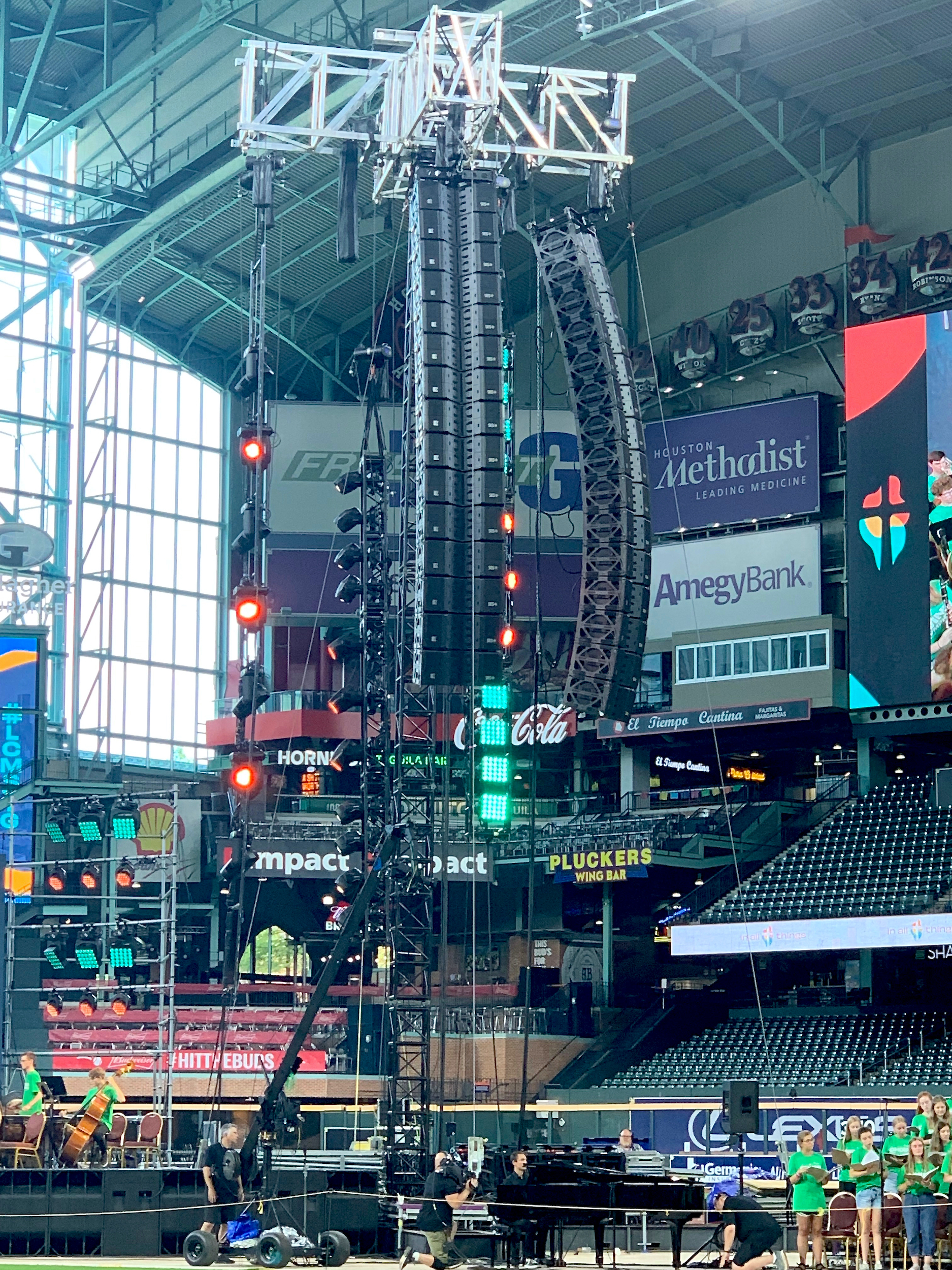 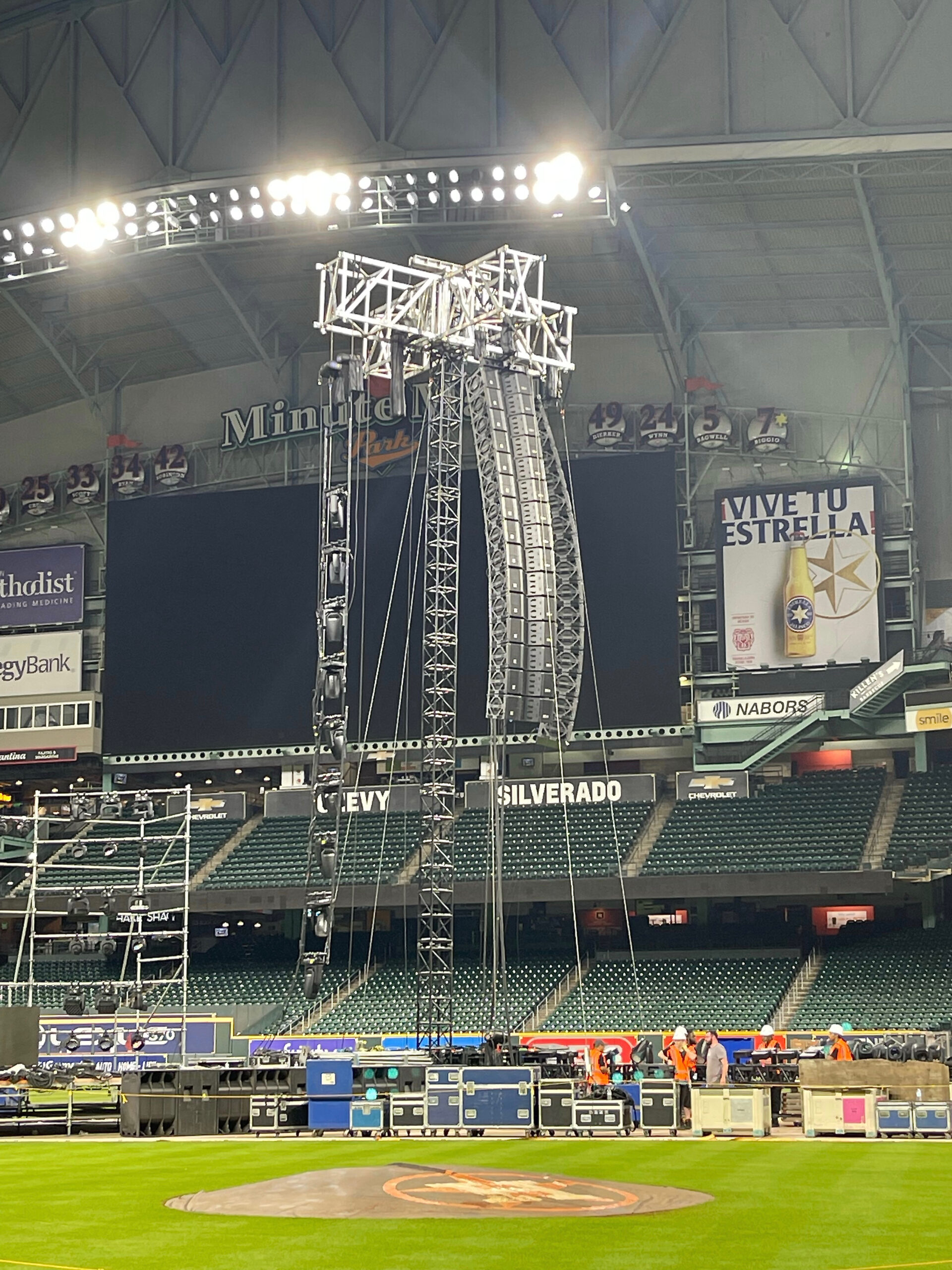