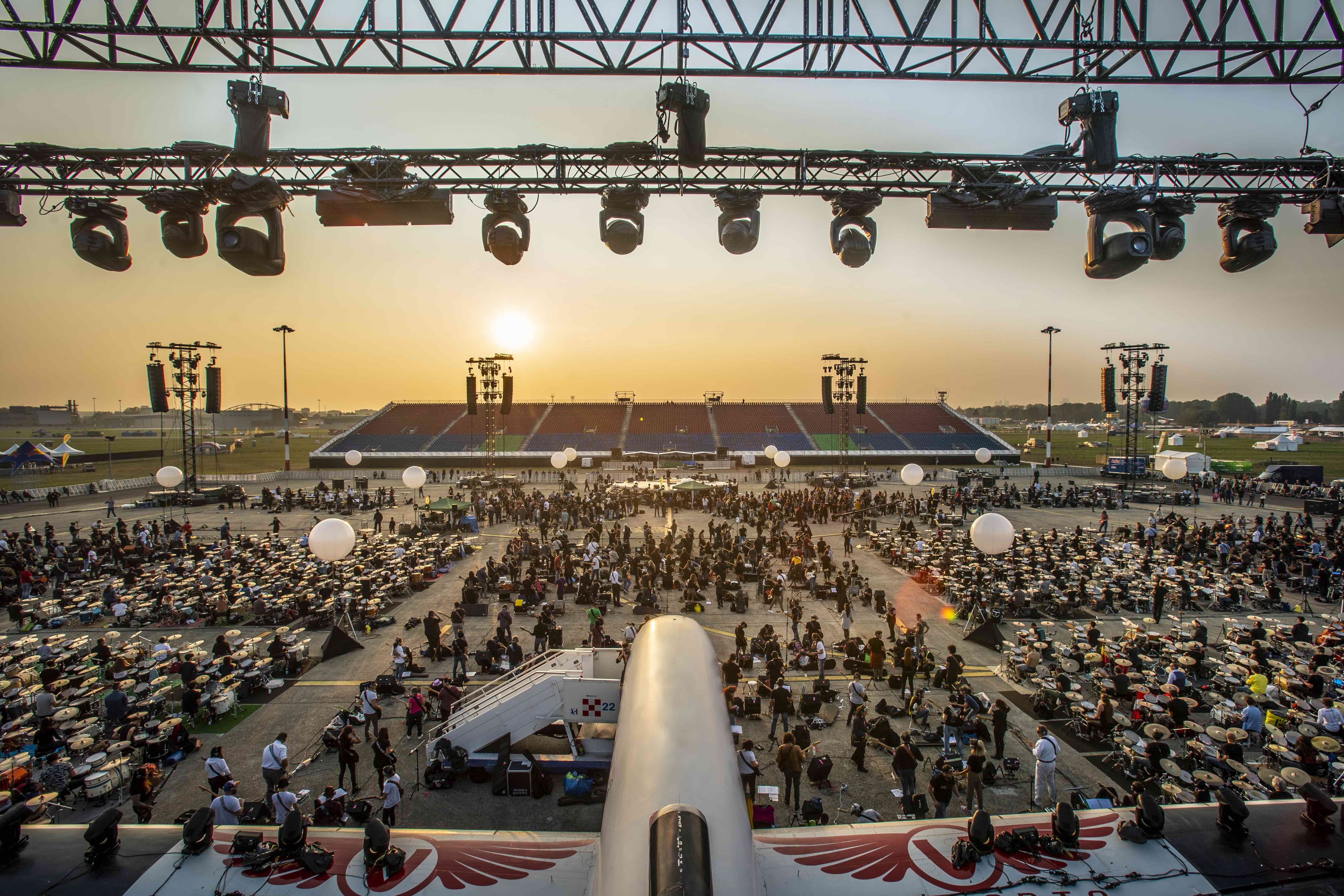 After captivating the Stade De France in Paris and the Commerzbank Arena in Frankfurt, Rockin’1000 brought their That’s Live – No Borders, On Board tour to Italy, landing in Milan and hosting two special guests: Manuel Agnelli from Afterhours (joined by Rodrigo D’Erasmo), and Subsonica.

The band originally found fame on 26 July 2015 at the Ippodromo Park in Cesena, where the 1,000-piece band played Learn to Fly in an effort to convince Foo Fighters frontman Dave Grohl to perform live in Italy (which happened the following November). Since then, the Thousand have been organising concerts around the world. 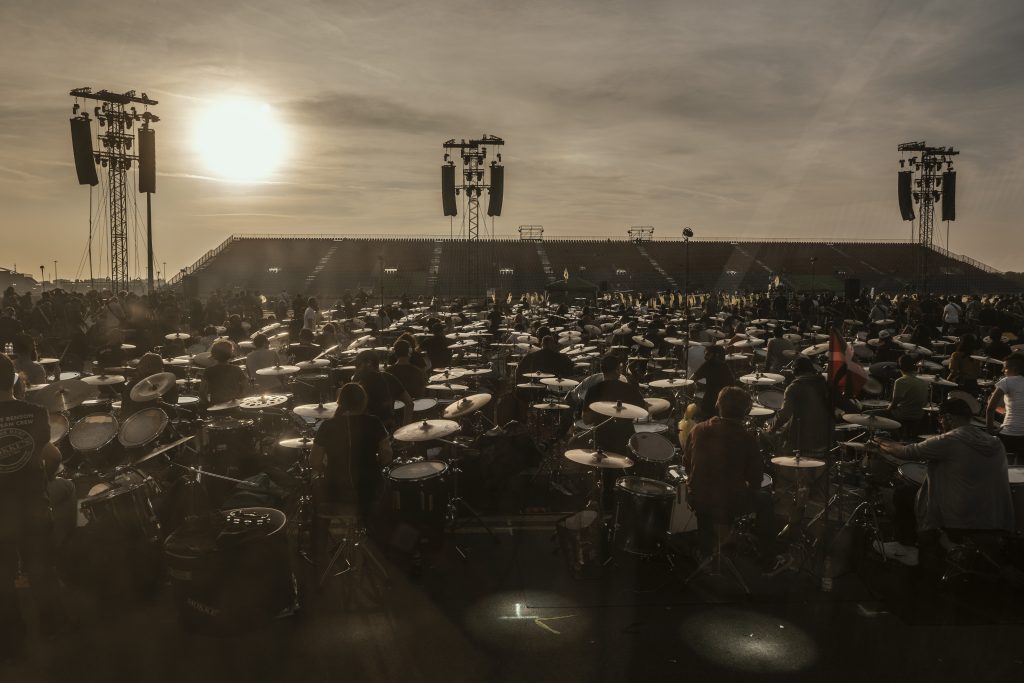 The band’s latest appearance – an outdoor show at newly renovated Milano-Linate airport – required the combined audio firepower of Outline’s GTO system and Powersoft’s K and X Series amplifiers to match up to the sheer the size of the stage and venue. This combination proved extremely effective at capturing the band’s massive live sound in Florence in 2018, so the show’s organisers knew the technology would be up to the task.

With such a huge amount of equipment necessary to pull off this unique event, the gear had to be supplied by three companies, all of which belong to Outline and Powersoft’s Italian / European rental network: Gigant Sound (Poznań, Poland), Emporio On Stage (Scandicci, Florence), and Show Technologies (Recco, Genova). 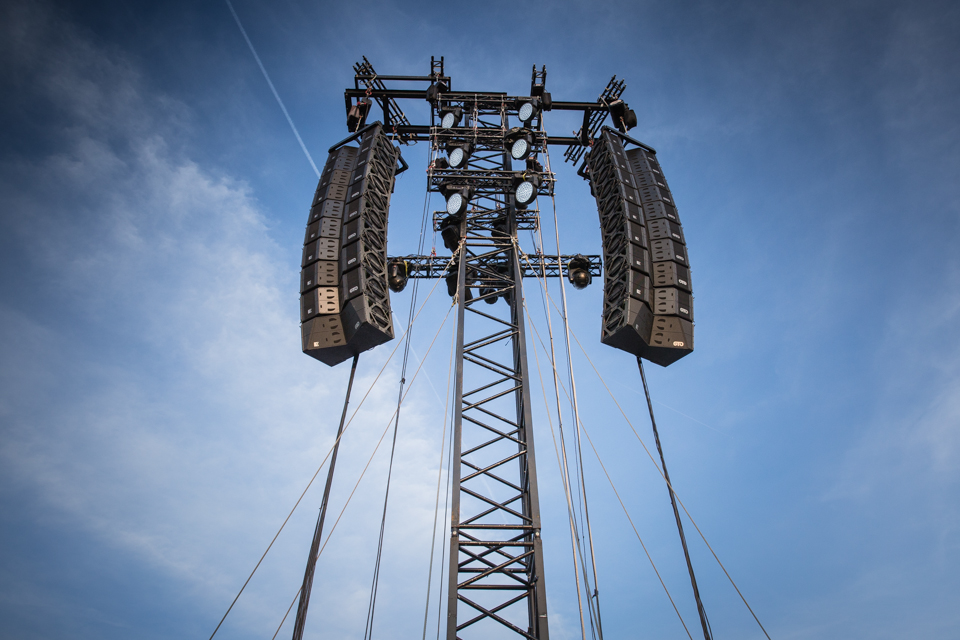 To ensure even coverage across the venue, 100 of Outline’s GTO modules and 72 x Outline DBS 18-2 subs were required. Several point-source systems (about 14 Outline Vegas 12 CX) were scattered among the Thousand as fold-backs and another 6 speakers (Outline Vegas 15 CX) were used for the monitoring on the stage.

With the entire live system relying on 101 Powersoft amplifier platforms strategically positioned throughout the venue, reliability, power and impeccable audio performance were guaranteed.

The tech team chose 73 x K10DSP AESOP to drive the main hangs, 23 x K20DSP AESOP for the subs and 5 x X8 Dante for fold-back, the conductor’s communication with the Thousand, and on-stage monitoring. 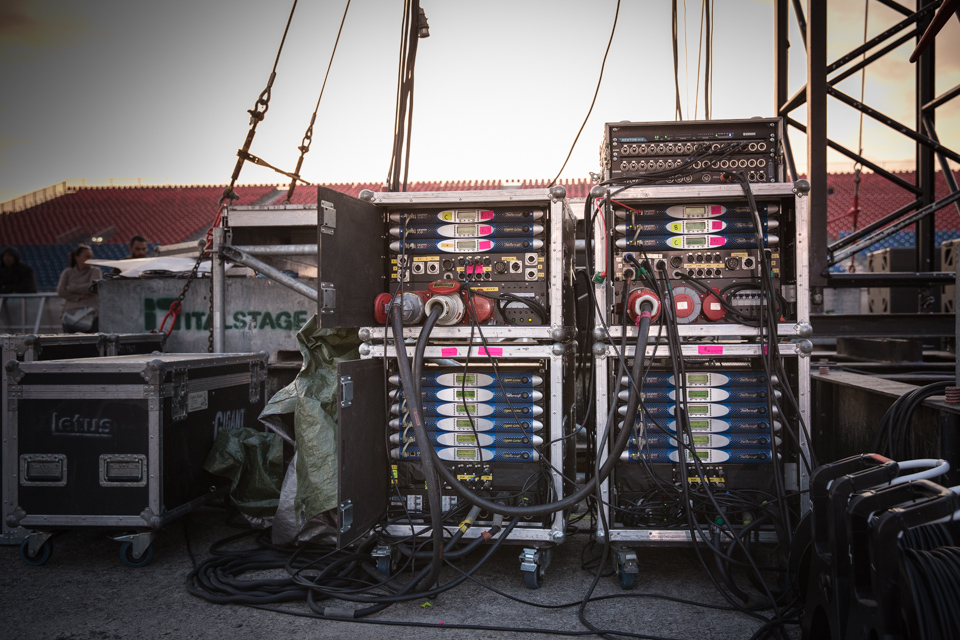 Over the years, the K series became the standard in switch mode amplification, providing incredible power output to concerts worldwide with the lowest weight and highest efficiency. Its sonic performances set a new target for professional audio market. Together with the X series the first amplifier that doubles as a system tool, integrating a large amount of functionality generally only found in separate outboard units, Powersoft was able again to keep things efficient, small, light and powerful. 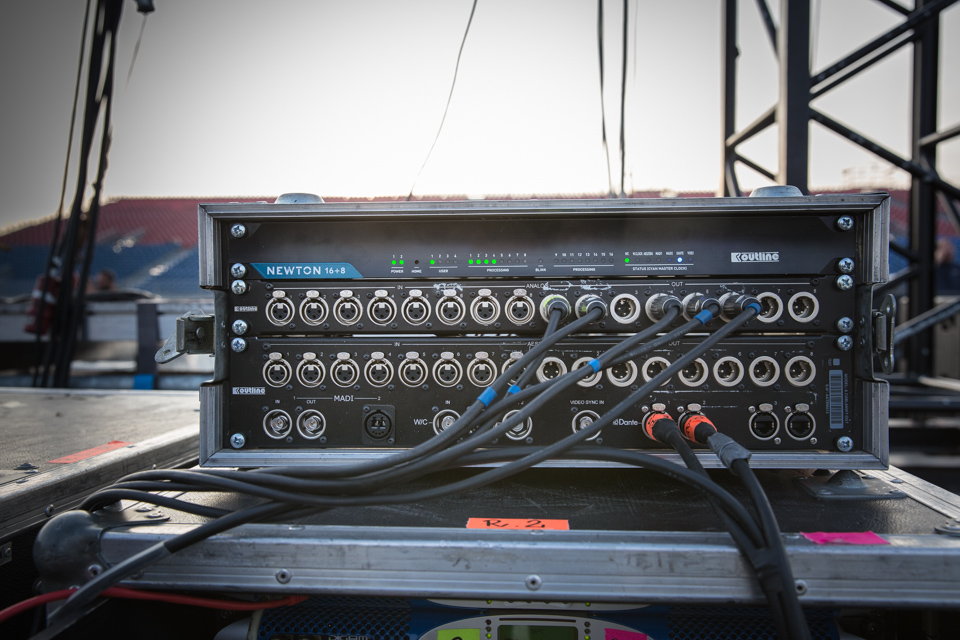 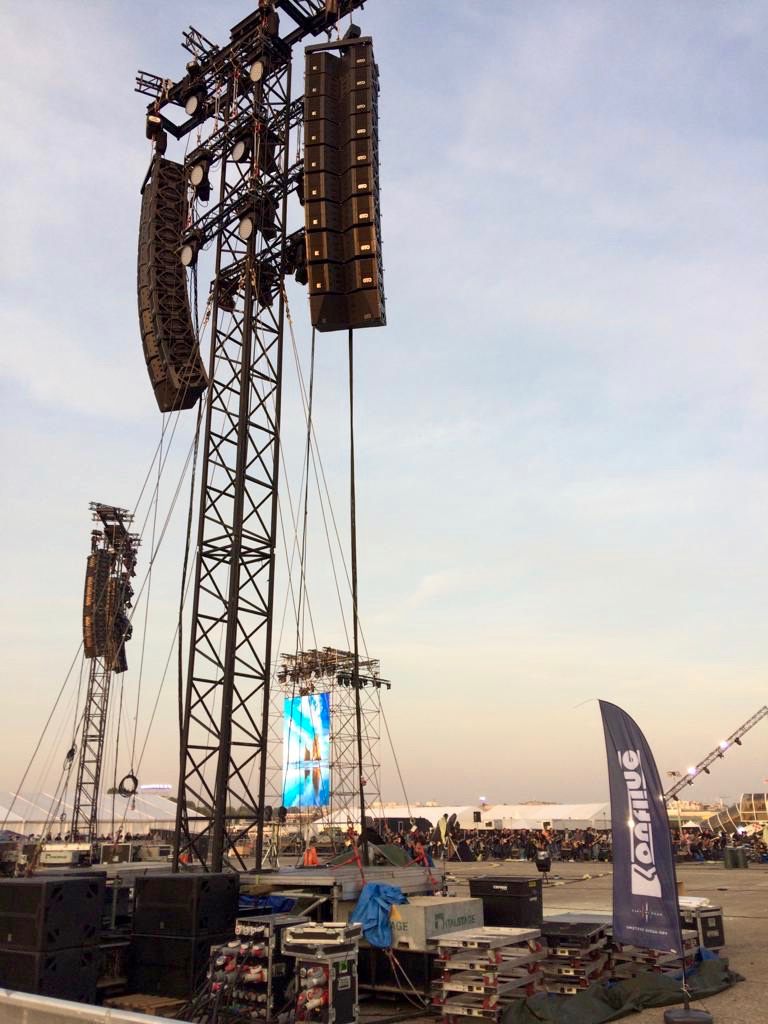 “The biggest challenges when amplifying the Rockin’1000 are the spatialisation and high harmonic content of the source,” said FOH engineer, Luca Stefani. “Managing this has been one of the most complex problems we have faced since the very first shows with the band.”
He continued: “Firstly, the performance area is about 100m wide x 50m deep and contains 1,000 different sound sources. This is incredibly difficult to discern through a single speaker due to the distortion caused by the transducers in trying to replicate such a complex mix. The technologies already on the market were unable to solve this problem, so we had to create a different way of arranging the PA and a different way of distributing the signals.”

At Milano-Linate airport, the crew rigged 10 speaker clusters to a total of 6 towers. Each area of the audience, including the sides, was covered by at least 2 clusters; one left and one right. Each of these clusters received a dedicated mix of different signals that tries to represent the acoustic sound coming from the 1,000 musicians.

The DBS 18-2 subs were placed in end-fire configuration at the foot of each tower and at intervals between them. In this case too, each sub block was driven by a dedicated signal to allow the engineer the freedom to decide the musical content to be reproduced.

Stefani said: “Our priority was clear from the beginning: there should be no areas considered inferior or less important in terms of coverage or sound quality. Every spectator must be able to perceive a sound source comparable to the physically present one. To be able to do this, the amount of cabinets and sound reinforcement points used is higher than you’d expect, even at a classical event.”

The scale of the networking was just as impressive with 22 separate signals (10 for the arrays and 12 for the subs) coming to FOH via Dante. Thanks to Powersoft Armonìa and Outline Dashboard, the engineers were able to keep things at a manageable level.

Outline’s R&D engineer, Giulio Gandini, explained the complex system: “Given the distribution of the amplification racks, we opted to use 4 x Newtons as Dante/analogue converters and to add an additional level of processing. This allowed us to ‘colour’ the whole system according to the needs of the sound engineers. In the stage area we had two switches properly set for Dante, one for the primary and another for the secondary. From here, via a ‘star’ connection we went to each Newton with two ethernet cables. This guaranteed a high level of stability in the event of power problems in a tower. Each Newton, having two independent power supplies, was connected to two different power lines in order to guarantee greater stability.” 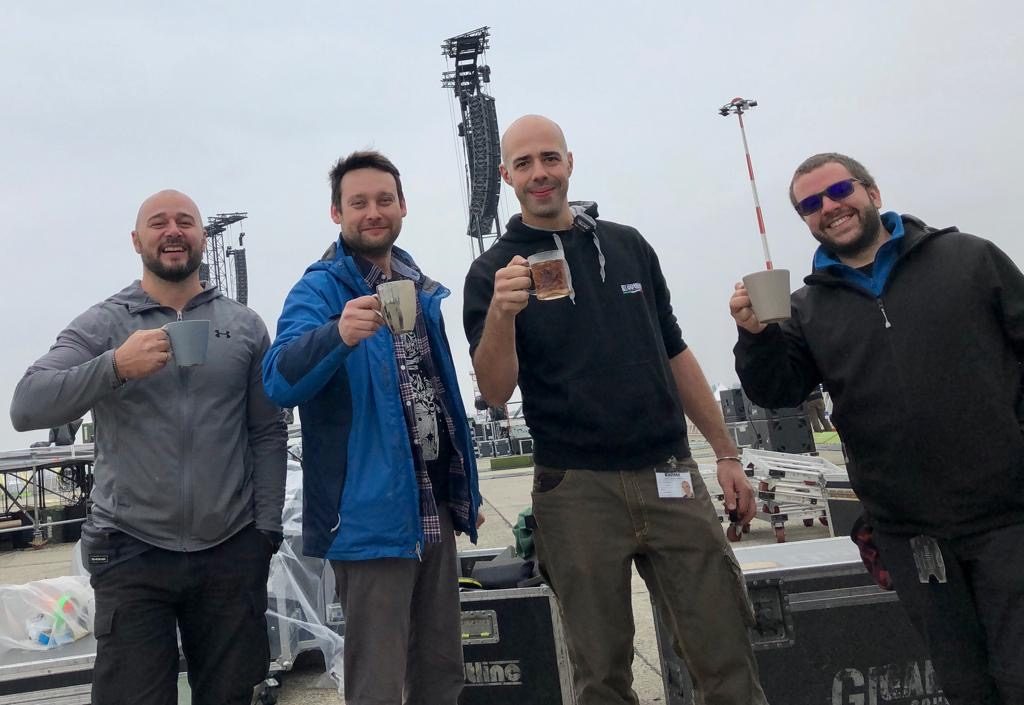 Newton’s analogue outputs were connected directly to the amplifiers, while a further ethernet line from the main desk connected the amplifiers to the network, allowing the crew to make use of Powersoft Armonìa’s intuitive remote-control capabilities. This was particularly useful during the rig, as Outline’s pro applications engineer Paolo Calza explained.

“The tuning didn’t take more than an hour. The remote control of the Powersoft K series amplifiers allowed us to control the entire system very precisely and in great detail,” he said. “The toning was done with the four Newtons we used to distribute the signals on the towers and, at the same time, convert the signals from Dante to analogue and aes/ebu. This meant we had a backup even on the last section of the distribution chain.” 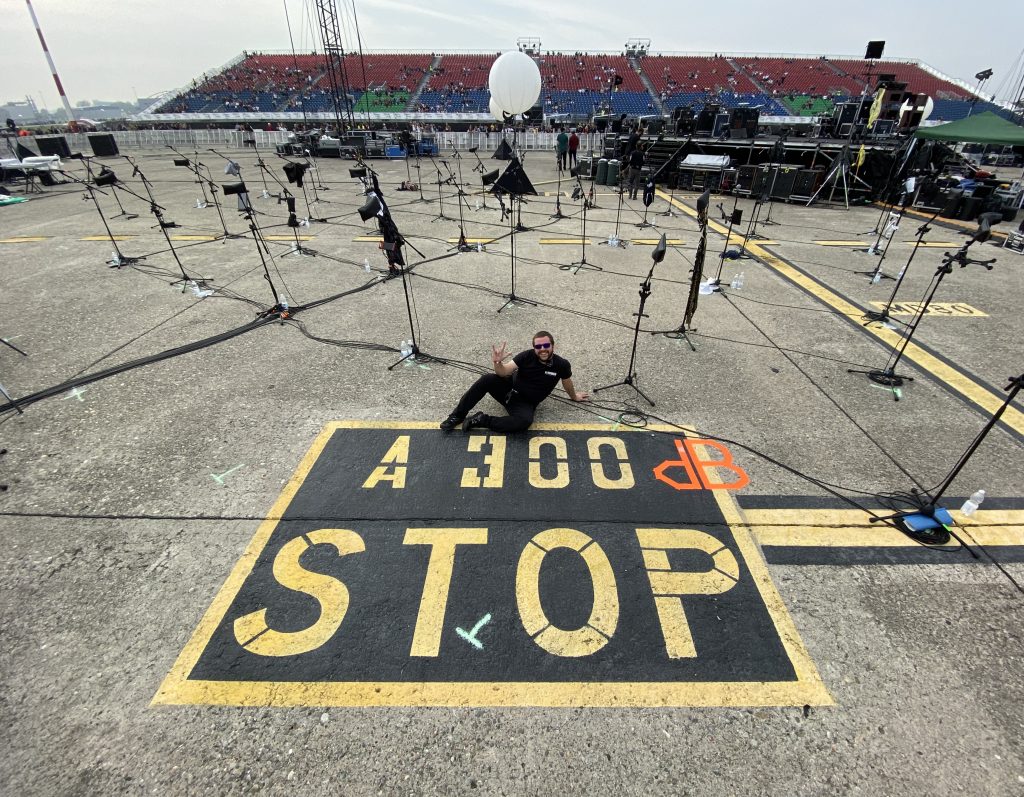 Gandini said: “It is a unique and grand show we had the opportunity and luck to participate in, whose final result was possible thanks to the cooperation of many professionals. Conveying the energy of 1000 people playing together is not an easy thing, but the cooperation between the parties involved and the use of adequate equipment were the keys to obtaining an excellent result.”

Despite the challenges and complexity inherent in such an event, sound designer Francesco Penolazzi was confident that the Milano-Linate airport show was the Rockin’1000’s finest to date.

He said: “It was fantastic and couldn’t have been possible without such an amazing team of capable and inspired people. I consider everyone who participated in the realisation of this event, first of all, to be great professionals but, more than that, they are great people. Once again, they showed their passion, giving my simple intuition that extra something. Just talking about the project unfortunately doesn’t do it justice; if you really want to understand a Rockin’1000 show you must come to the field and listen – there is nothing quite like it.”