In the image above, L-R: Rat Sound’s Jon Monson and “Pickles”, Dave Rat and “Bones”, J2/Outline US Jason Farah and “DB”, and Jeffrey Cox 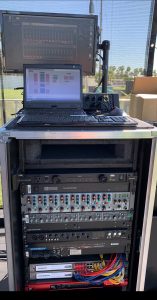 Hailed as the “Next Generation in Audio Control and Networking”, Newton pushes the boundaries and advances the management of sophisticated audio systems by combining new filter technology, multi-format audio signal routing, multi-format standards conversion and digital signal synchronization all in a single 1RU networkable chassis.

It’s not by happenstance that Rat Sound deployed Newton at Coachella. Considered perhaps as one of the most challenging audio signal processing and distribution events worldwide, Newton ticks a multitude of boxes when it comes to providing multi-platform solutions in the festival and touring arenas. It’s a game changer!

Newton is poised and in position as Rat’s Front of House, the “Hub” in other words, through which each mixing console is connected and then capable of addressing the myriad of Digital and Analog connectivity options. Final mixes from FOH and Newton now are delivered directly to each of the stage’s PA’s or out to the delay tower systems that populate each of the 7 stage locations.

“The Newton 16+8 coupled with our Dashboard software is a dream come true in technical innovation and flexibility”, stated Jason Farah, J2/Outline US, North American Sales. “Newton offers smart, real-time technical solutions to many of the ongoing problems Rat Sound Technicians experience, and the industry as a whole, for that matter.”, Jason explained. “A festival the size and scope of Coachella requires FOH agility with each artist’s mixing console technical needs. Now Rat Sound can simply ask how they would like their signal sent?”

Jon Monson, Head of Touring for Rat Sound led an extensive charge both in-house and at live gigs testing and analyzing Newton’s capabilities and concluded that “This is the solution that we have been waiting quite some time for, the innovative technology coupled with dependability is unparalleled in the industry and it is now used in each of our Standard Drive racks because of its flexibility.”

Rat Sound’s own Dave Rat added, “We’re extremely happy with the capabilities of Newton now, and we have been contributing ideas, requests for future capabilities and Jeffrey and Jason have been extremely focused on seeing that our input is included in the relevant development roadmap for Newton.”

“We knew what an asset Newton could be to Rat Sound’s portfolio of products and services,” stated Outline US’s Jeffrey Cox, North American Sales, J2/Outline US, “the collaborative efforts between Jon, Dave and the Rat Sound Family of Technicians and Engineers has been a rewarding and productive enterprise. Rat’s input has been invaluable in allowing us to further Newton’s technical capabilities now and with a nod to the future”.

On hand for the entire festival is a highly respected and talented FOH System Technician, Bjarne Hemmingsen. He is responsible for the Main Stage and became extremely familiar with its software called Dashboard and could see the extensive capabilities of Newton and its software platform, going forward.

It’s clear that Newton has a key function in the future of Rat Sound’s system deployment, not just at festivals, but anywhere the new Standard Drive Racks are being used on Tour or at Special Events.