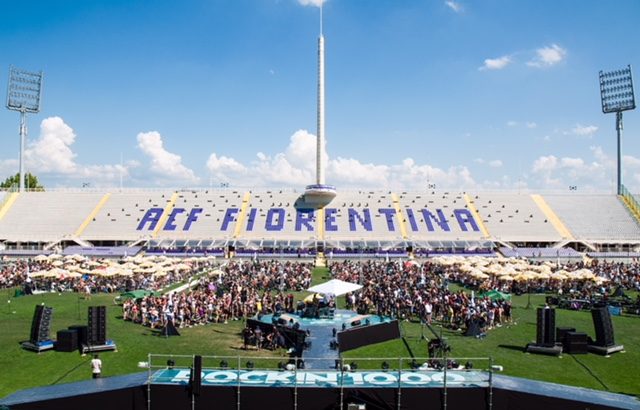 Record-breaking rock band gets even bigger

Outline and Powersoft pack the punch for the unique Florence show

In 2015, die-hard Foo Fighters fan Fabio Zaffagnini gathered 1,000 musicians to record a video appeal to the band to come and play in his home town of Cesena (Italy), in which “Rockin’1000” sang the US band’s “Learn to Fly” in a local park. The video went viral and FF front man Dave Grohl replied, accepting the invitation. The Cesena gig was followed by the first Rockin’1000 concert by the huge band at Cesena stadium (2016) and a Summer Camp, at Mont Blanc (2017).

The latest episode in the Rockin’1000 saga took place in July at Florence’s Artemio Franchi soccer stadium, when the “Biggest Rock Band on Earth” (1,454 performers from over thirty countries) played to an ecstatic crowd of over 13,000. The event also featured Courtney Love, the first guest artiste at a Rockin’1000 event, who performed three of her hits with Hole.

Ensuring the crowd a realistic listening experience were two key brands on the international pro audio scenario, both headquartered in Italy, Outline and Powersoft, whose specialists interacted with Cisko Ridolfi and Francesco Penolazzi, respectively Rockin’1000’s sound manager and sound designer.

The main Outline PA, deployed round the band, which occupied a huge area of the pitch, comprised ten stacks (six with six GTO C-12 and four with five GTO), plus six lines of subs in end-fire array (four consisting of four DBS 18-2 and two made up of four LAB 21 HS). These (and the monitor speakers fielded) were supplied by Outline rental partners Emporio on Stage and Soundtech. 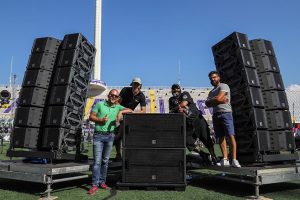 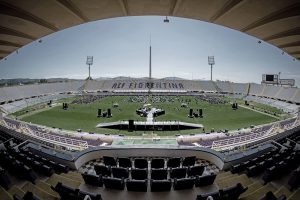 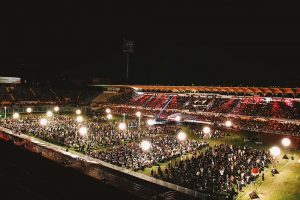 Power was courtesy of sixteen Powersoft X8, plus three more Powersoft amps for the monitors, all connected via Dante. The X8s enabled to monitor the status of the mains supply and tune and align the set-up according to instructions from FOH engineer Luca Stefani and Outline tech support and R&D engineer, Giulio Gandini.

Gandini explains, “On normal stadium amplification projects, we try to achieve even coverage with as little overlap as possible between the enclosures, to ensure identical sound in every seat. In Florence, on the other hand, overlap was indispensable, to guarantee a realistic sound image. In spite of the loudspeakers being quite far from the audience, our line-array elements’ waveguides enabled to achieve extremely accurate sound coverage.”

As well as the band’s headphone and IEM monitoring facilities, two Outline Vegas 12 provided additional monitoring and six Vegas 15 CX were deployed to communicate with the musicians entering and leaving the pitch. 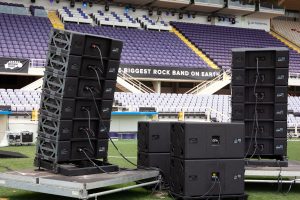 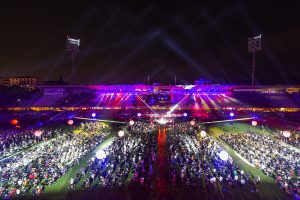 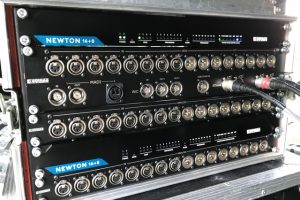 The rig’s calibration and alignment was carried out using Powersoft’s intuitive proprietary Armonía software, with which the Powersoft amplifiers were controlled and managed. Armonía enables to realize projects “offline”, then match them with the hardware at the venue, a time-saving feature greatly facilitating system designers’ work.

An Outline Newton 16+8 system control and networking unit also received signals from the main FOH console and was on standby in the event of any network problems and for distribution. It received a Dante signal, carried out its computing, and distributed the signal to the amplifiers on the pitch.

Stefani, who had already worked with Outline products in the past, opined after the event, ”GTO is one of the few systems on the market that enables to obtain the sonic impact we wanted and above all, thanks to its lengthy pedigree, can ensure great reliability. In my opinion, the Outline systems are excellent for this type of event, at which SPL and pattern control are fundamental elements for achieving the necessary results.”