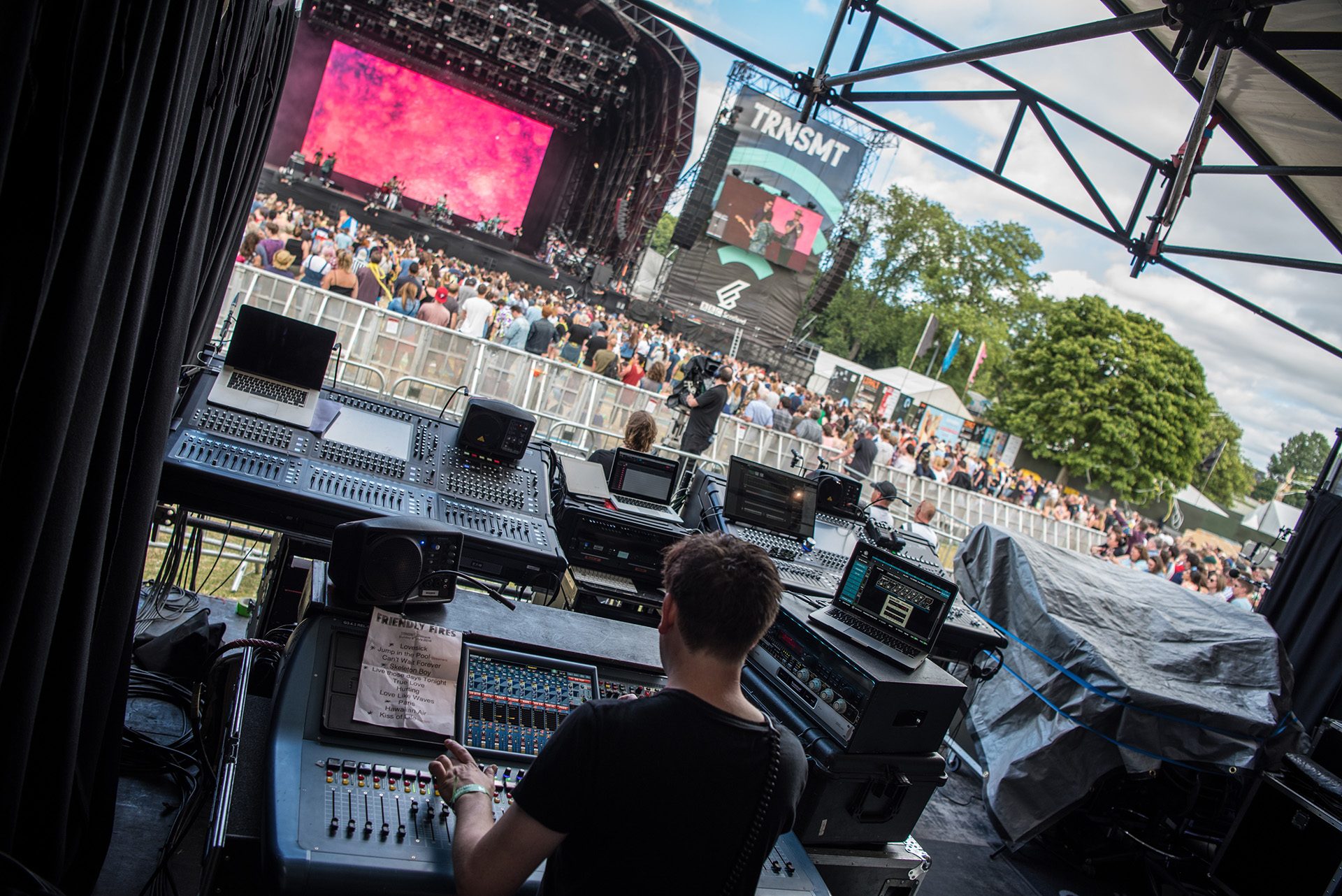 Merseyside-based Adlib Audio handled an extraordinarily busy festival programme through the long, hot summer of 2018. As early-adopters of Outline’s remarkable new processor, the variety and sheer volume of their workload provided an ideal platform to road-test their new NEWTON units – and road-test them they surely did.

‘For this summer’s festival commitments we’ve effectively used our NEWTON units in one of two ways – either as a festival console matrix system or as a full system controller. For the former, a single NEWTON device was configured as a central hub, bringing together the outputs of our dual house consoles (running as an A/B system to facilitate band changeovers) plus multiple guest consoles and our small ‘VT’ desk that deals with VT, DJs and announcements.’

‘We also used a MADI A-D/D-A convertor to expand the analogue input capability of the system, which provided an additional 16 analogue inputs, eight AES and eight analogue outputs, connected to the NEWTON via co-ax. Our matrix was then set up to handle all 16 inputs from the various console sources, routed as appropriate to a total of 14 outputs for all zones of the main PA plus broadcast and record feeds.’

‘This setup was used very successfully at BBC Radio 1 Biggest Weekend Scotland, in Glasgow at the TRNSMT Festival, the Rewind Festivals Scotland, North and South respectively, both Reading and Leeds Festivals and the Greenman Festival.’

Ian continues, ‘In the second scenario, we used our NEWTON as a full system controller. I prototyped our first ‘Newton Control Rack’ and this was given a run out at the Liverpool International Beatles Convention, used to process the PA system supplied for the Bootleg Beatles at the Liverpool Echo Arena.’

‘At this show it was used to drive the entire PA and was also integrated into our measurement systems to provide analysis feeds to SMAART etc. Control over the NEWTON was via a MacBook Air connected to a wireless access point via Cisco network switches.’

‘This setup was slightly simpler in that we needed only 13 of the 16 available inputs for main and support outputs plus VT, SMAART reference (via Dante) and a pair of inputs for music playback. These were then matrix-mixed within NEWTON to feed 13 outputs which drove the main and side PA hangs, subs, fills, the SMAART reference feed to a laptop plus L&R sends to record and the VIP area’.

Feedback from visiting engineers and system techs has been both plentiful and encouraging as Ian also reports:

“For a lot of these guys it was the first time they’d seen a NEWTON in use, but even so we had a lot of really positive comments, for example, “Using the Newton has made the whole headache of getting multiple guest consoles into the system a complete breeze.” Another remarked, “ASRC on every matrix input…….love it…..no clocking headaches any more!”, while another said, “So many input options means we can accommodate virtually anything that is thrown at us”.

“Yet another commented, “It’s so easy to use. I was a little nervous having never used it in anger but the intuitive control software meant that I was up and running in minutes”… but perhaps my favourite was “It’s quite a thing!!.”

Ian has the final word: ‘In summary, our NEWTONs have had a good workout this summer in a few different scenarios and so far we are very happy. There is still some development work to do on the control side of things but the relationship we have developed with Outline is fantastic and we have also been beta testing the new releases of software prior to distribution, so all is looking rosy.’

Note: Outline’s NEWTON Product Specialist Fernando Rey Mendez will be at the PLASA show @ London Olympia on Monday September 17th and @ IBC Show on Tuesday 18th September. You can reach him at +39 349 4520123 or email (reymendez@outline.it) to arrange a meeting there.