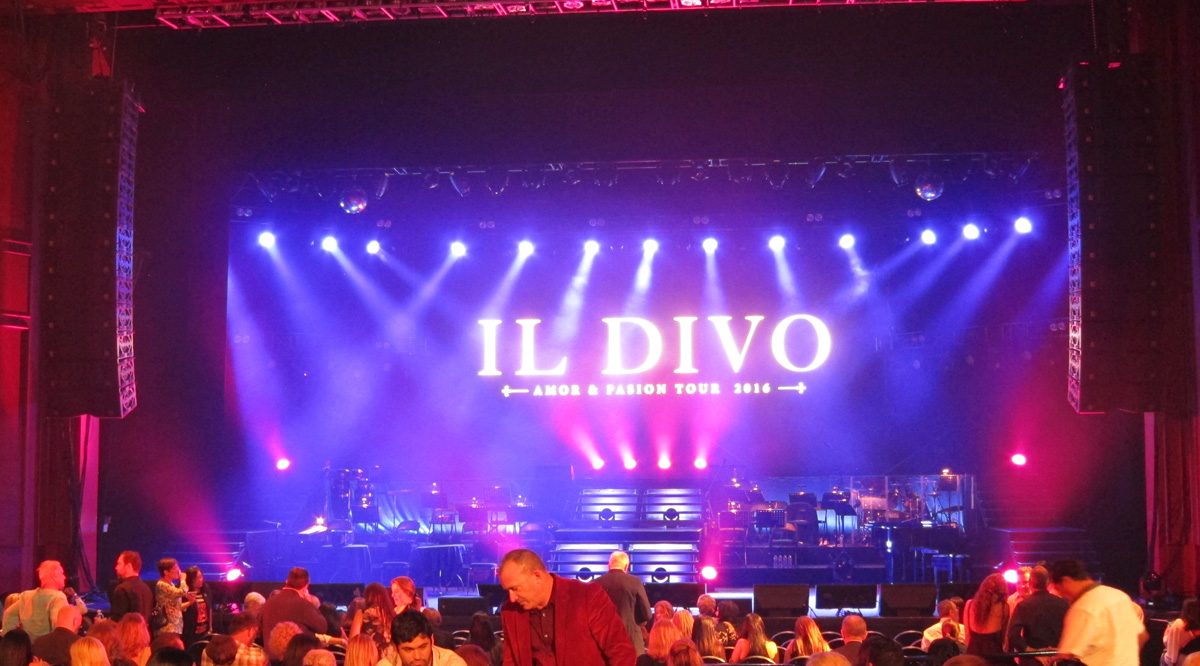 The incredible global success of multi-national pop / classical sensations Il Divo continues as their ‘Amor & Pasión’ World Tour 2016 concluded with over 40 dates across the USA and Canada between September and November. Their ‘Amor & Pasión’ album, released in late 2015, debuted at the top of the Billboard Latin Albums chart and the supporting tour visited 30 countries. 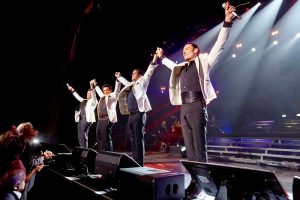 Following the very successful UK and European legs, for which London-based Capital Sound supplied their Outline GTO C-12 system, the north American shows were handled by Special Event Services (SES) of Winston-Salem, North Carolina. A long-time user of Outline systems, SES added GTO C-12 to their inventory for the tour.

“SES has enjoyed Outline’s GTO for years but this was our first tour with the C-12 system. I can tell you that, where GTO is unsurpassed as a large-format stadium-capable system, the C-12 is even better suited for theatre (and likely arena) deployments. Our system tech, Bryan Kiger, who was familiar with the GTO, was quite pleasantly surprised when he first setup and ran initial test tracks through the C-12.”

“Clearly, Outline have refined the Linear-Phase presets for the C-12, and the initial ‘out of the box’ experience is a sonic marvel. Bryan was impressed at how little he had to do to tune the system to a particular room. I completely concur. Outline has done a wonderful job making C-12 sound fabulous right from the start – rich, potent, and with the silky smooth highs that Outline is known for. In a theatre setting, it was the most hi-fi experience, much like sitting at home listening to my reference system.” 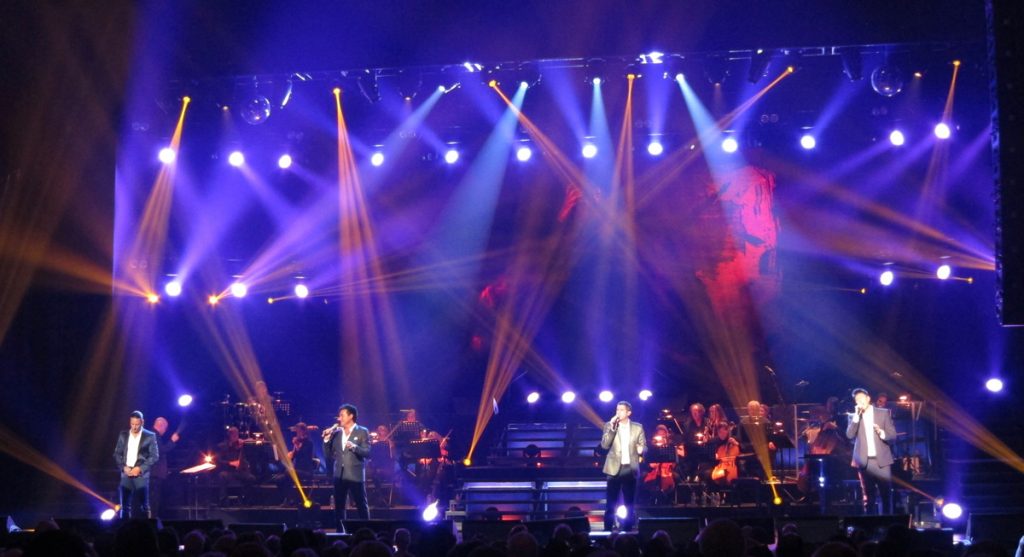 Jason continues, “The system we carried for the Il Divo theatre run consisted of twelve Outline C-12 over a single Outline GTO-DF (downfill module) flown per side from the GTO Lightweight Fly Frame. We deployed eight Outline GTO-LIPF lipfills across the front of the stage, adding two Outline Mantas on the outer edges of the stage when needed, plus four Outline LAB21-HS subwoofers per side, ground-stacked. All amplification was via Powersoft K8s, and each amp rack had a Lake LM26 loaded with the latest Linear-Phase presets for the C-12 and the other components as well. Front-end-processing was via Lake LM44. In addition to the FOH system, the stage monitoring was also all Outline – the twelve wedges were all Outline SM212s, powered by Powersoft K8s and the flown sidefills were six Outline Mantas per side.”

“As to the C-12’s ease of deployment, the self-captive rigging hardware as well as the integrated angle-selectors make it as easy as it gets. Outline carried this design over from the GTO series, and that is a very good thing. It’s fast to deploy, and even faster to bring back in. Load-outs were fast and easy! Also, the new Lightweight Fly Frame has a central spreader-bar which allows for single-point hangs. In some theatres this is critical in that they only give you one rigging point per side. Once again, OpenArray shines in accurately calculating single-point hangs with great precision.”

Prediction and simulation software is a vital tool in getting the best out of modern loudspeaker systems and Outline’s OpenArray was also front and centre on this production: “Of course, we used Outline’s OpenArray prediction software for all venues. I’ve used simulation software from many other brands, and I find OpenArray to be the easiest, fastest, and most accurate prediction software out there. OpenArray was invaluable in ensuring all seats in the listening space were covered. Some theatres have unusual configurations, and using OpenArray during the design phase prior to deploying the speakers made sure the speaker system was deployed optimally, every time.”

Manning FOH for Il Divo was Matteo Cifelli whose long experience with the act meant some unusual system designs – Jason adds, “An interesting choice for near field deployment was that Matteo requested they be done in stereo pairs, such that no matter where anyone was seated on the front rows, they had stereo imaging from the GTO LIPF Lipfills. Matteo then did a masterful job of mixing the shows, always ensuring a full, satisfying mix. The Il Divo audiences consistently enjoyed a high-quality show. With such a great engineer as Matteo and a top-notch system as C-12,  it doesn’t get better than this. Thank you Outline!” 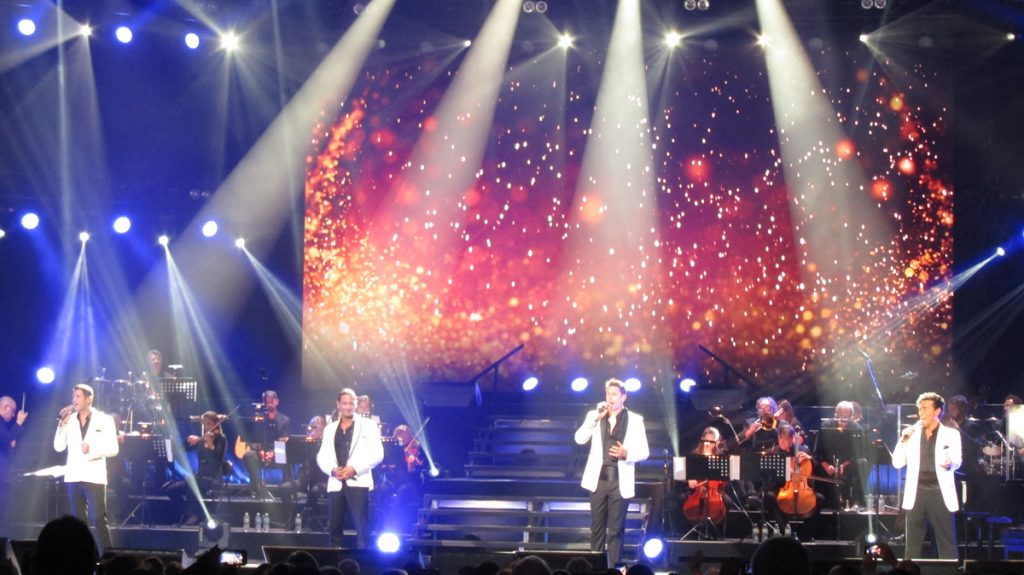 Matteo’s enthusiasm for the system continues, as he explains: “When you mix Il Divo, there is no space for improvisation. A mixture of orchestral elements, powerful drums and four vocals makes it one of the most challenging acts to mix so if the PA does not deliver quality your life is going to be hard!”

“The GTO C-12 is a speaker that delivers music, not frequencies. It is powerful, defined and exciting but mostly just easy to mix on. It delivers what you want to deliver without any artifacts, phase problems or ugly harmonics. Its lack of distortion, power and stereo imaging are unsurpassed, you feel like the singers are there with you. No matter where you are and how many boxes you have, the consistency of your mix is always there. The only problem with this system is that you get spoiled and when you don’t have it, it’s hard to go back!” 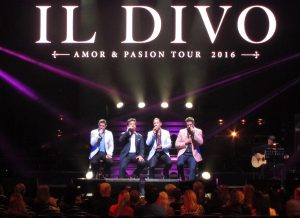 Capital Sound’s General Manager Paul Timmins commented, “Having worked with Il Divo for some 12 years we were delighted to hear that Matteo Cifelli would once again be at the helm for FOH duties. Having made the Outline investment in early 2016 we knew that Matteo would request the system for the 2016 tour that would start in May in Europe before crossing the Atlantic to tour there later in the year.”

Paul continues, “Matteo was delighted to be involved with the design of the system with Capital Sound’s Robin Conway, with the tour subsequently being supplied a full Outline system including four hangs of GTO C-12 cabinets (40 x C-12 and four GTO-DF downfills) plus sixteen GTO subs with eight flown and eight more on the ground in cardioid mode. The system was finished off with 8 Outline LIPF-082 Lip fills. Il Divo also have a requirement for a wide coverage flown side fill as not all the band members use IEM’s, so the Outline Mantas was selected for this with six cabinets per side. The system ticked all boxes for the engineer, artist and truck space, with the compactness of cabinets and the Powersoft X8 amplification. The entire system was driven by just two 12U amp racks per side containing three eight-channel Powersoft X8 amplifiers per rack.”

“Following the success of the tour it was collectively decided that Capital should discuss US tour support with one of our partner companies there. I looked at various options that included shipping our system, but also at what options were available for partnering as Capital’s preferred policy is to work with local support where possible. SES were the best placed supplier as it was Matteo’s wish to have the GTO C-12 system and of course they also have the necessary inventory and experience with Outline.”

Paul concludes, “Capital worked with production to obtain the quotes for what was needed and then connected them with SES to ensure that the tour continuity and pricing was maintained. The 2016 Il Divo tour delivered exceptional audio on both sides of the Atlantic thanks to a talented engineer and fabulous Italian technology.”