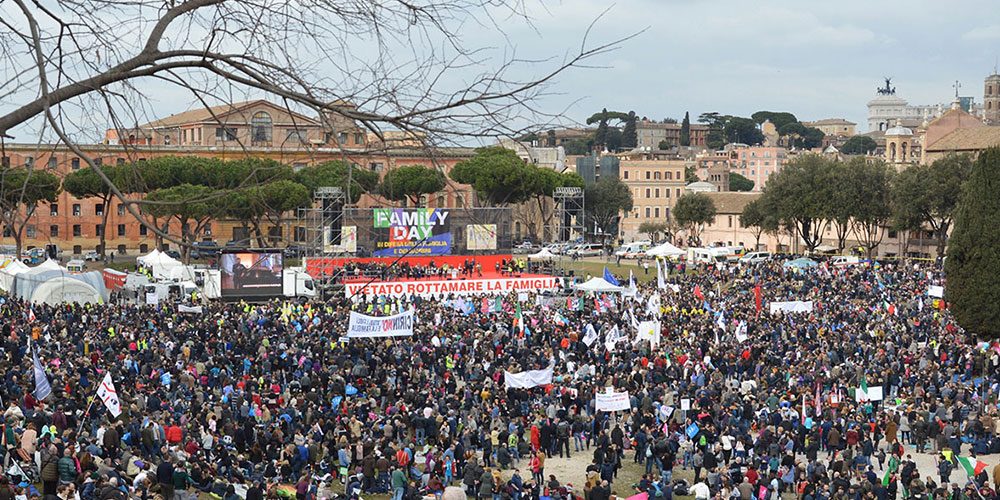 May 18, 2016 Posted by Administrator
Sound Stories

Among the numerous large rallies staged throughout Italy for and against the proposed law regarding same-sex civil unions and adoptions by same-sex couples, one of those that attracted the widest media coverage was the “Family Day” staged in January at Rome’s Circus Maximus.

Dating back to 7 B.C., the venue is in fact the second largest sports stadium of all time and, where chariot races, simulated battles with infantry, cavalry and elephants once drew an enormous number of spectators in ancient Rome, the 680 yards long Circus attracted a huge crowd, not only there to show its support, but also hear exactly what the key speakers had to say.

The big challenge of ensuring perfect intelligibility for the delicate topics covered was accepted by audio contractor Cipiesse from Rezzato (near Brescia). The audio team comprised Cipiesse partner and production manager Marco Riva, globetrotting sound engineer Raffaella Gatti (one of the few ladies in this role in Italy), PA man Giancarlo “Jerry” Paladini and stage and mic tech Matteo Castellazzo. 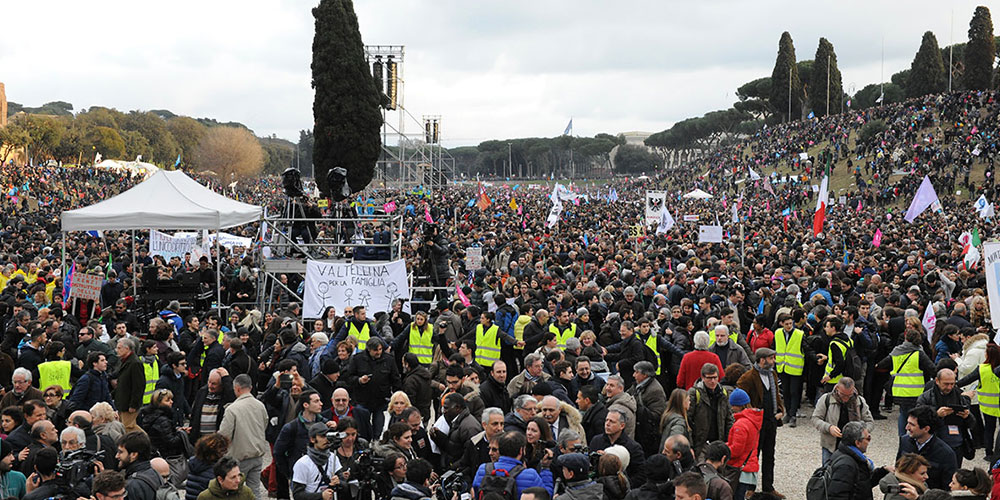 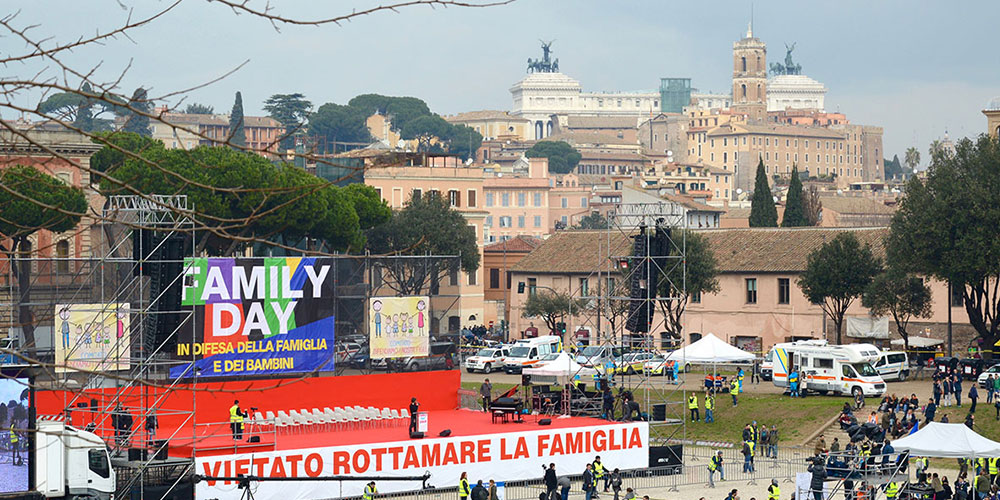 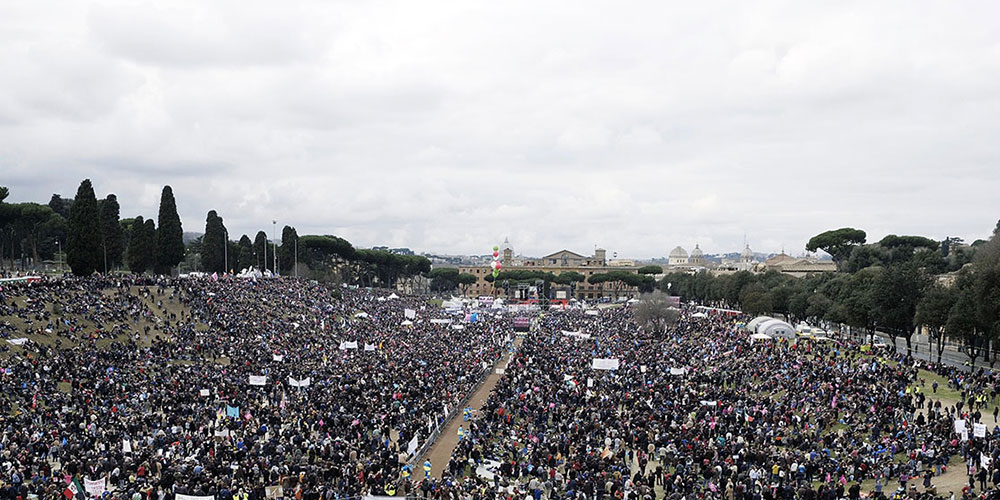 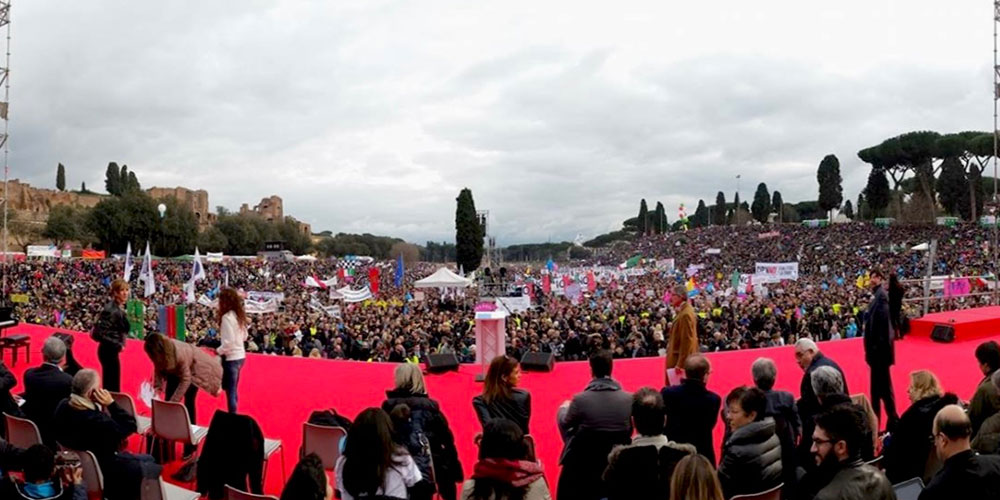 Regarding the unenviable task of getting speakers’ messages over clearly to such a huge crowd, Paladini states, “Our brief was to ensure sufficient intelligibility in an area 350 metres long and 100 wide, with an embankment rising up to over 45 feet (almost 14 metres) on one side. Since the location was changed very late in the day to cater for the forecast crowd, we had very little time to organize the installation, and the budget was limited, so the biggest difficulty was be absolutely certain of covering such a large irregular area with sufficient power. We decided to play it safe by fielding Outline’s line arrays, which we’d already greatly appreciated on several occasions in the past for their throw, precision and audio quality. Outline’s OpenArray software enabled us to carry out precise detailed simulations, allowing us to arrive prepared, without time for the customary site inspection.”

The first of two delay systems, positioned 90 metres from the stage, comprised two towers with Outline Butterfly hangs, the left-hand one with fourteen modules and the right-hand one with twelve. The second pair of towers, positioned 180 metres from the stage, had two identical hangs, each with twelve Butterfly modules. All the towers were 12 metres high.

Apart from the main rig, which featured six Powersoft X8 power amps, the rest of the powerhouse was all Outline (a combination of T5 and T7 models) and processing courtesy of XTA 448 and 446.

After the event, Paladini enthused, “In spite of having to deploy the delays further from the main rig than we would have under ideal conditions, the results were very good, and we managed to cover the area requested with sufficient intelligibility and SPL using just two pairs of delay towers.”